Lake Sentani Festival (Fds) Ix With the Release of 100 Lanterns 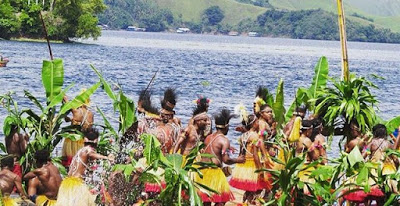 Lake Sentani Festival is a tourism event that is routinely carried out in Bumi Cenderawasih Papua. This festival is the ninth exhibition held in the Lake Sentasi area.

The festival is also quite lively, the reason is that visitors who want to watch this exhibition sometimes come from outside the island and abroad. In addition, this exhibition was also marked by the release of 100 lanterns flown from the shores of Lake Sentani.

The release of this lantern is intended as a symbol of all the dreams that are owned by the community for the advancement of Lake Sentani tourism. 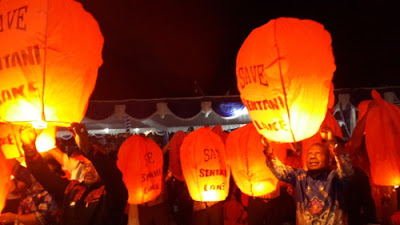 The soft opening night of the Lake Sentani IX Festival (FDS) IX was decorated with a quite serene atmosphere on Sunday (6/19) night. One hundred lanterns sign the delivery of dreams flown on the shores of Lake Sentani which is in the tourist area of ​​Khalkhote, East Sentani, Jayapura, Papua. 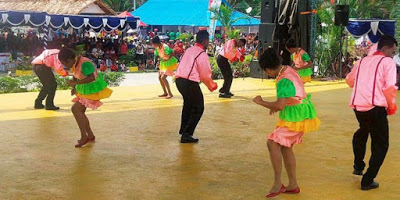 After the competition and the dances were performed, the evening schedule continued with the release of one hundred lanterns led by Jayapura Regent Mathius Awaoitau. Red lanterns that read 'Save Sentani Lake' were also distributed to residents and FDS visitors. 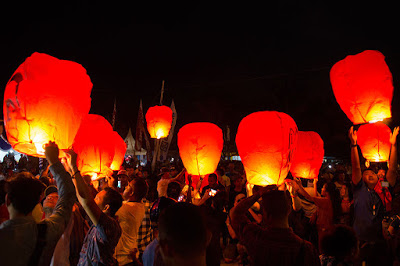 The first lantern to be lit was owned by the Jayapura Regent, then followed by representatives from the National Police / TNI, all customary tribal leaders, village heads, religious leaders, youth leaders, women leaders, and local Muspida. The atmosphere was initially crowded, suddenly silent when the lanterns were lit.

The sky also looks charming when the lanterns are flown one by one. Each has a dream although not all of them are spoken through words. But apparently there is a common mission and vision that seemed imprinted simultaneously in the minds of residents and also local officials or figures.

"What is clear is that we will continue to voice the development of FDS. Because Sentani has the potential to become a tourist area," Mathius said when asked about the meaning of the lantern flight.

The Jayapura Regional Government indeed plans to make the Sentani area an integrated tourism area. Of course, by 'selling' the natural beauty in Sentani and Jayapura.

"On the edge of Lake Sentani there is an international airport, there is a nature reserve of Mount Cyclop. Behind the mountain there is the beauty of the Pacific Ocean, the beaches of Jayapura," he said.

Even so, Mathias also has a dream so that the natural beauty in Jayapura is maintained. And that requires collaboration of all parties including from the community itself.

"Although there is rapid development, there must be preservation of nature inherited by each generation. There is an important and interesting natural potential, but we must keep it safe," Mathius said.

FDS basically wants to promote the cultural diversity of the Sentani people. In Lake Sentani, there are 24 villages with a number of customary systems each. FDS wants to show the beauty of diversity. Including exhibiting cultural products produced by the community.

The leaders in Sentani themselves hope that with the success of the FDS, this will uplift the dignity and dignity of Papuans. FDS at this time has entered the national schedule of the Ministry of Tourism through the Indonesian Enchantment schedule.

"Great hope, the exhibition can lift the dignity of the people of Jayapura. We have a dream in Papua that all dignity of the citizens must be lifted. So far our dignity has been below," said the ethic figure from Yapsi District, Daud Masari.

One Jayapura resident, Ichad, is committed to jointly protect the tourism area of ​​Sentani and its surroundings. Because he wants Jayapura Regency to be able to be seen on the national to international level. He also felt that Jayapura actually has tourism potential that is not inferior to other places in Indonesia.

"I as a citizen of Papua see the lanterns released as if they have meaning so that we all have to preserve Lake Sentani and also Cyclop Mountain. If we have to be together, citizens and the government," he said.

Merauke Regent Frederikus Gebze who was present as a guest proposal said he really appreciated the existence of FDS. He saw the spirit of the government and residents need to receive loans for the preservation and utilization of the Sentani area. 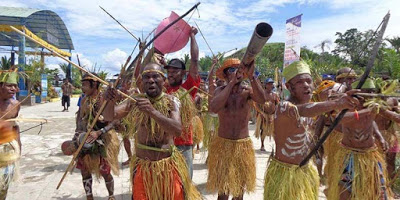 Hopefully with this Lake Sentani Festival, the tourism in Cenderawasih Earth will become more developed not only domestically but also able to be famous abroad.
Facebook Twitter Telegram