-->
Home Indonesia Java Mountain Travel Viral Sightings of Beautiful Cliffs on the Hiking Trail, Like the Location of the Lord of The Rings Movie!

Viral Sightings of Beautiful Cliffs on the Hiking Trail, Like the Location of the Lord of The Rings Movie!

Indonesia is one of the countries that has the most stunning natural beauty in the world. In fact, not a few natural destinations in this country whose beauty has been recognized to foreign countries.
Recently, a stunning natural appearance that was previously rarely highlighted has gone viral on social media. It was so beautiful, many netizens thought that the place was the shooting location for the Lord of the Rings movie.
The video was originally uploaded via the @indoflashlight Instagram account. In the video, you can see a view of a cliff flowing with mountain springs.
Based on the written information, it is known that the location of the beautiful cliff is on the climbing route of Mount Rinjani via Torean, East Lombok, West Nusa Tenggara.
Because it has a steep height, the view of the cliff is even more stunning with the flow of a waterfall that flows from the top of the cliff.
The view becomes even more pleasing to the eye because of the moss and grass attached to the cliff wall.
The feeling of peace and calm can be felt even if you only see the view of the cliff from video uploads on social media.
Investigate a calibaration, the beauty of this cliff is actually already famous among the surrounding community, especially for mountain climbers. This area is even dubbed the Jurassic Park Cliff by the public and climbers. 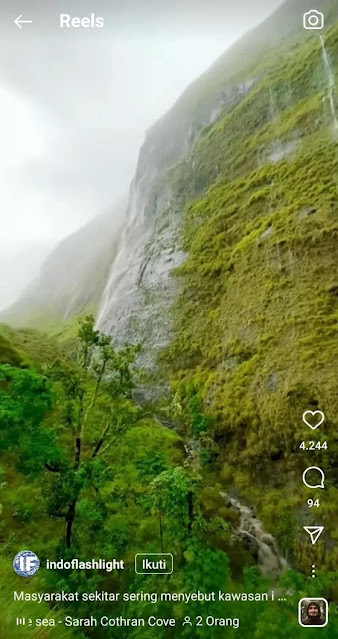 Located on the climbing route of Mount Rinjani via Torean, to reach this beautiful cliff, climbers must pass through a narrow and steep road, complete with steep rocky cliffs.
But the struggle will certainly be worth it after arriving at the cliff location. Especially if you come in the rainy season, then the scenery that is served will be even more beautiful.
Long before it was used as an official hiking route to Mount Rinjani, this Torean hiking trail has actually been used by the indigenous Sasak people of Lombok for a long time as the fastest route to Lake Segara Anak.
The people themselves strongly believe that the Segara Anak Lake area is a sacred place. So by the local community, this route is also known first as the traditional route or pilgrimage route.
Not only will you be presented with beautiful views of the Jurassic Park Cliffs, climbers who pass this route will also find a number of hot spring pools which are often called 'Kalak'.
For the people here, the 'kalak' water around the lake is also believed to have a number of properties to cure various diseases.
With beautiful natural scenery along the way, it is only natural that this Torean route suddenly becomes a favorite route for climbers who want to reach the top of Mount Rinjani.
When you arrive at this viral cliff, you will be presented with views of green hills and mountain valleys that spoil the eye.
Of course, being around the Jurassic Park Cliffs seems to make you not in Indonesia, but like in the mountainous areas of New Zealand.
Suddenly, this upload also reaped various reactions from netizens who saw it. Instead of the Jurassic Park film, most netizens actually felt that the location of the cliff was very similar to the one in the Lord of the Ring film.
Facebook Twitter Telegram