UniQ Eu Org
2/17/2021
Facebook Twitter Telegram
Grebeg Syawal, Yogyakarta Palace Earth Alms Ritual — For the residents of Yogyakarta, the celebration of Eid al-Fitr is not only celebrated with large family gatherings or mutual forgiveness. However, this big day of victory is celebrated festively by all people in Yogyakarta, both natives and tourists with the traditional Grebeg Syawal ceremony. 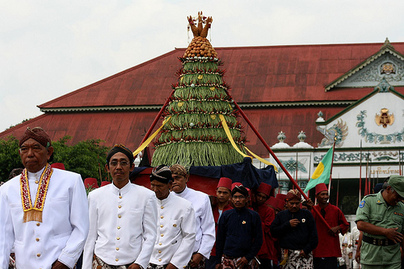 Grebeg Syawal in Yogyakarta was held to welcome 1 Shawwal which coincided with the celebration of Idul Fitri. Grebeg is the second grebeg this year after Grebeg Mulud was held. Grebeg Mulud is the anniversary of the birth of the Prophet Muhammad SAW.
This grebeg procession was carried out by carrying a gunungan containing agricultural produce from the Yogyakarta Palace to the Gedhe Kauman Mosque Yogyakarta. The use of this gunungan was led by Kanjeng Gusti Pangeran Haryo (KGPH) H. Yudaningrat followed by 10 bergodo (palace troops).
After being prayed for, the gunungan were paraded towards the North Square and greeted with salvo fire. Furthermore, this gunungan, known as Gunungan Lanang, will be fought over by the people present. According to belief, those who succeed in obtaining the produce of the earth from the gunungan will get a blessing from the Almighty.
This tradition is carried out from generation to generation and cannot be separated from the influence of Islam in Java. Grebeg is a form of gratitude to God for successfully carrying out fasting for 1 month as well as a ritual to welcome the Hijri or Islamic New Year.
This tradition, which is one of the features of Yogyakarta, is finally able to show that the Yogyakarta palace does not only carry out a state function, but also a religious function. The specialty of this tradition can also be seen when the public can witness firsthand the court servants carrying these mountains.
Meanwhile, after the grebeg mulud and syawal traditions are carried out, the people of Yogyakarta will hold Grebeg Besar at the upcoming Eid al-Adha celebration.
Facebook Twitter Telegram