Borobudur tourism destinations, objects of 7 amazing wonders of the world in Indonesia

UniQ Eu Org
3/05/2021
Facebook Twitter Telegram
As an Indonesian nation, we should be proud of ourselves to have a country that is very rich in natural resource diversity, fertile land, great history, as well as a variety of interesting and amazing tourist destinations that are very popular and well-known in Indonesia.
World. One of them is the Borobudur temple which is a gigantic magnificent building relic of the triumph of Buddhism that once grew up in Indonesia and even Borobudur temple is included in the 7 phenomenal wonders of the world and is also included in the World Wonder Heritages which must always be preserved and preserved.

Borobudur Temple located in Magelang Yogyakarta is a giant building built by King Samaratungga, a descendant of the Syailendra Dynasty, who is one of the kings in the genealogy of the Hindu kingdom of Mataram. 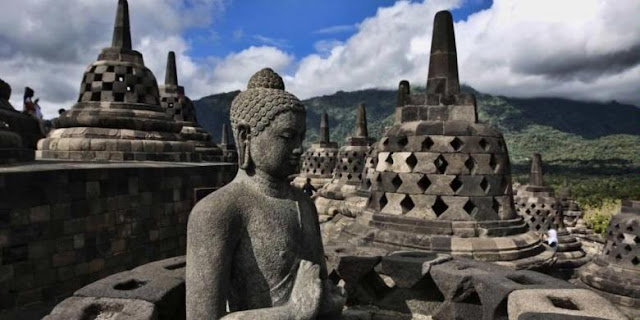 In an inscription Kayumwungan says Borobudur temple which is also a place of worship for Buddhists was completed on May 26, 824M where there is a span of 100 years from the beginning of its construction. The name of Borobudur Temple itself which has 504 Buddhist stupas, and has about 1469 kinds of reliefs is taken from the word Budhara which means mountain with terraces, and some also say Borobudur has the meaning of a monastery on a high place.

The giant historic building of Borobudur Temple is one of the important buildings for Buddhists in the world where all the reliefs contained in this Borobudur temple reflect the teachings of Buddha, therefore this temple is also used as a medium of education and learning for people who want to learn Buddhist teachings.
Even one Buddhist from India in the 10th century named Atisha visited this Borobudur temple in the 10th century to study and deepen Buddhist teachings, and armed with Buddhist teachings from Serlingpa, namely the manuscripts of the king of the Srivijaya Kingdom, the result was that he succeeded in developing teachings. Buddhism and became abbot of Vikramasila monastery and taught Tibetans about the knowledge and how to practice the Dharma.

That's all our travel information about Borobudur Tourist Destinations, the 7 Amazing Wonders of the World in Indonesia, and it would be a pity for you to miss it for you to visit where the famous Borobudur temple is located in our own homeland, isn't it great? Hopefully useful and useful. Thank you.
Facebook Twitter Telegram