The Child Prodigy Who Can See in The Dark 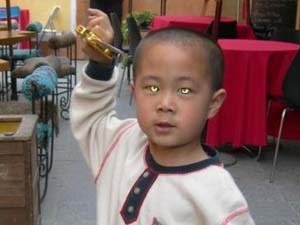 This is Nong Youhui, a magical boy who can see in the dark, originally from China, born with bright blue eyes. But what's special about Nong's eyes is that they can see in the dark. Initially, Nong's father Ling had taken Nong to a hospital in Dahua, southern China, due to his blue eyes. However, as Ling explained, the doctor only said that Nong's eyes would stop shining and his eyeballs would turn black again.
"They told me he would stop growing with glowing eyes like that and his eyes would return to black like most Chinese people, but the truth is his eyes haven't changed."
As for Nong's eyes, he can even read in dark places without the need for the slightest light and what's even more amazing is that Nong's eyes can see as clearly as normal eyesight during the day.
According to experts, Nong was born with a rare condition called leukodermia which causes Nong's eyes to have less protective pigment and become more sensitive to light.
Facebook Twitter Telegram