The Egyptian Ministry of Antiquities officially released an ancient tomb found in the Dra Abul Naga necropolis on the west bank of the Nile River, near the city of Luxor, Egypt in 2017.

Archaeologists found a number of statues, mummies, pottery, and other artifacts in this tomb. "The tomb belongs to Aminemhat and his wife, Amenhotep," said Mostafa Al-Waziri, leader of the excavation team from Egypt.

Although Amenhotep is generally a male name, Waziri explained that the team found evidence from the grave that stated that she was the mistress of the house.

At the entrance, Aminem's figure is also depicted on a partially damaged statue.

Between their legs was a statue featuring their son. Archaeologists say that the family lived during the reign of Egypt's 18th Dynasty. 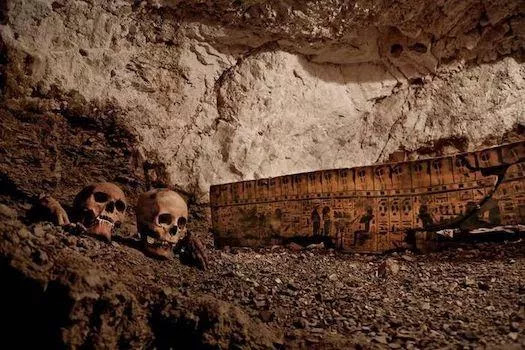 However, the tomb seems to have been reused. This is shown by the existence of a sarcophagus from the 21st Dynasty as well as 22.

There are two tunnels in the ancient tomb, one of which belongs to Amenemhat. In the Amenemhat family burial chamber, archaeologists found a number of mummies, sarcophagi, as well as wooden burial masks.

In addition, there are also many statues featuring the figure of the couple. In another tunnel, the team encountered the mummy of a woman who died at the age of 50 with the remains of her child.

Initial test results on the woman's remains suggested that she may be suffering from a number of ailments, including bacterial disease of her bones.

"This newly opened tomb is not in good shape. But its contents will provide clues to other discoveries," Egyptian Antiquities Minister Khaled El-Enany quoted National Geographic as saying.

For example, the tomb contains 50 stamped earthenware-like burial cones. Some 40 of them display evidence of other tombs belonging to four officials of that period.

A team of Egyptian archaeologists also found separate tombs in the same necropolis. The find holds a number of mummies, ten wooden sarcophagi, as well as more than a thousand burial statues.

At the discovery, El-Enany praised the significance of this finding because many items were found in intact conditions.

The second place is found near the Valley of the Kings, the final resting place of a number of famous Egyptian rulers, one of whom was King Tutankhamun.

The city of Luxor is east of the Nile and Egyptians of the ruling and upper classes are buried west of the river for a sign of respect.
Facebook Twitter Telegram