Starting as a Butcher, Salt Bae is a Successful Restaurant Business

UniQ Eu Org
4/25/2022
Facebook Twitter Telegram
Before his life of luxury, Salt Bae was just an ordinary butcher. He succeeded in achieving his dream thanks to his hard work and determination. 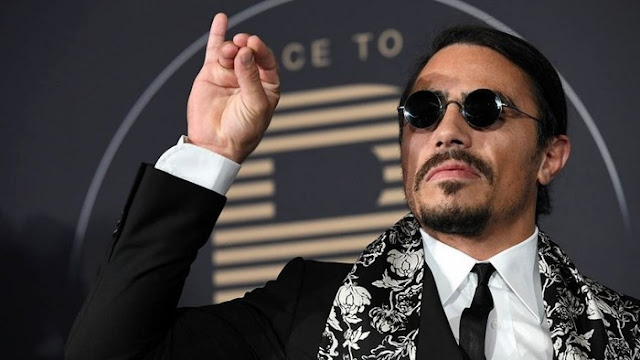 The popularity of the name Nusret Gokce began on January 7, 2017. At that time, he uploaded a video of himself preparing an Ottoman steak on Instagram.
In the video, he effortlessly slices a tender piece of meat. The action ends by sprinkling salt crystals on the unique meat.
He uses one bent hand and then sprinkles salt a high enough distance over the pile of meat. The video was watched by millions of users. The unique salt sowing movement became a meme and was widely discussed on social media.
The iconic style of sowing salt seems to have earned him the nickname 'Salt Bae'. Bae itself is actually a shortened version of the word 'babe' or 'baby' which means dear. But Salt Bae as Chef Nurset is an acronym for "Salt Before Anyone Else."
Also read: Thanks to his unique action of sprinkling salt on the meat, this Turkish chef has gone viral!
Its popularity is increasing due to the number of celebrities, soccer stars and important world figures who visit Nusr-Et Steak House. Currently, Nusr-Et Steak House is not only available in Turkey and Abu Dhabi, but also in Doha, New York to Miami.
Even so, not many know about Salt Bae's life story. Actually this long-haired man started his career from the bottom. Salt Bae is a man who was born in Istanbul, Turkey in 1983.
He is the son of a miner who has four brothers. Reporting from NBC News, at the age of 13 Salt Bae began as an intern who served as a butcher at a local butcher shop. Then he spent years at a steakhouse in Turkey.
In 2009, Salt Bae ventured to migrate to Buenos Aires, Argentina which is known as one of the biggest meat consuming cities. His goal is only one, he wants to improve his skills in the field of butcher or meat cutter and meat industry experts. At that time, he could not even speak English or Spanish.
"I've always hoped and wished I could open a restaurant," he explained to NBC News.
Salt Bae had time to share his overseas journey when Argentine star Lionel Messi visited his restaurant. He uploaded a touching caption in the video when Messi said that his steak was delicious.
a Turkish businessman named Ferit Sahenk visited the Salt Bae steakhouse. Ferit fell in love with the taste of Salt Bae's steak. He finally made the investment.
The improving economic conditions have made him successful in opening steak restaurants in Ankara, Doha, and Dubai. Even though he now lives in abundance, Salt Bae never feels that his life has changed. He was still doing his usual routine.
"My life has not changed now. I still continue to work from morning to midnight," he concluded.
Facebook Twitter Telegram