-->
Home unique Wow This Man's Stomach is Covered With Breasts

This Man's Stomach is Covered With Breasts

UniQ Eu Org
4/01/2022
Facebook Twitter Telegram
Breasts are generally owned by every human being, but it is different if we want to see female breasts and male breasts. Surprisingly, there is an incident in South Africa that is very surprising, the stomach of a man is overgrown with the breasts of a woman. How come ? It is said that the man had diabetes which made his stomach experience strange changes. 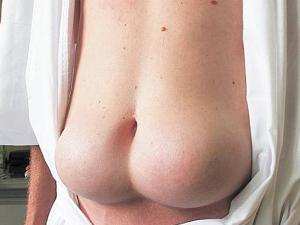 The 55-year-old man with type 1 diabetes surprised doctors after revealing the shape of his stomach that had changed to resemble a woman's buttocks or breasts. During this time, he received a prescription for insulin injections in two areas of his stomach to control blood sugar levels.
However, he did not know that injecting insulin in the same place could trigger swelling of the soft fat in the layers of the skin. Having not changed the injection site for three decades, the man suffers from a condition called severe lipohypertrophy.
"We haven't seen a case like this in years," said Dr Stan Landau, from the Center for Diabetes and Endocrinology, Joannesburg, the team of doctors who treated the man.
Initially, the patient was advised to rotate the injection site and use a smaller needle. He was also given different types of insulin. But unfortunately, the team of doctors lost contact with him after he no longer fulfilled his routine check-up appointments.
Dr Landau said that the patient injected insulin in the same place because he thought a lump in the stomach was normal for the insulin injector. "He's seen other patients even though they weren't as big as his. Since he wasn't sick, he never had them checked out."
He added that the lump can shrink, but will trigger permanent cell damage without plastic surgery. "Many diabetic patients do not have clear information on how to properly administer insulin," the team of doctors wrote in the New England Journal of Medicine.
Type 1 diabetes occurs because there is damage to the cells responsible for producing insulin, so the body is unable to produce insulin. Insulin functions to allow glucose to enter cells as fuel.
Without insulin, glucose will build up in the blood. For this reason, insulin injections are needed to control blood sugar levels in diabetic patients. The injection is also done by rotating the injection area.
Facebook Twitter Telegram